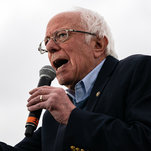 Bernie Sanders Outlines Funding for His Plans, but It May Not All Add Up

Senator Bernie Sanders of Vermont, under growing pressure to explain how he would pay for his very expensive policy agenda, released a checklist on Monday evening that he described as a full explanation of how he would finance all of his proposals.

The actual document is somewhat limited, and in some cases the revenue Mr. Sanders identifies doesn’t match the costs of his plans.

For example, he estimated Sunday night on “60 Minutes” that the price tag for his “Medicare for all” plan would be about $30 trillion over 10 years, but the revenue he identifies for it in the new outline totals about $17.5 trillion. It is possible that the gap could be filled by existing appropriations for Medicare and Medicaid, but Mr. Sanders did not mention those in his outline or in the Sunday interview.

But his decision to release the outline at all is significant given his months of resistance to discussing precisely how he would pay for his plans. That has been a major source of criticism, especially in the past few weeks, as he has cemented himself as the front-runner for the Democratic nomination.

He made the announcement Monday evening during a town hall-style event on CNN, where he was also pressed over his recent comments on Fidel Castro and the behavior of some of his supporters online.

After going largely unscathed in recent debates, Mr. Sanders is now facing the intense scrutiny that comes with being the front-runner, and the topics he confronted in the event on Monday are likely to come up again in Tuesday night’s debate.

The criticism over his longstanding refusal to release full details of how he would pay for his plans has come not only from moderates who argue that his agenda is unaffordable, but also from supporters of his main progressive rival, Senator Elizabeth Warren of Massachusetts.

Ms. Warren released a comprehensive plan in November to pay for her own version of Medicare for all, and the resulting scrutiny of the details was a major factor in her campaign’s decline. Mr. Sanders largely avoided that level of scrutiny by not releasing such extensive details.

His announcement on Monday came nominally in response to a question about whether his plan for free college was equivalent to President Trump’s promise to build a border wall and make Mexico pay for it: a rallying cry for supporters, but with no realistic path to happening.

But he had clearly anticipated an opportunity for the reveal, because he had a piece of paper ready to pull out of his pocket.

“I thought that question might come up. All right. Here it is,” he said. “This is a list, which will be on our website tonight, of how we pay for every program that we have developed.”

Within minutes, there it was.

Later in the forum, the most inevitable subject of the night came up: Mr. Sanders’s declaration on “60 Minutes” on Sunday that, while he opposed the authoritarianism of Cuba’s government, “it’s unfair to simply say everything is bad.”

“When Fidel Castro came to office, you know what he did? He had a massive literacy program,” he said in that interview. “Is that a bad thing? Even though Fidel Castro did it?”

Those comments angered many Cuban-Americans, who are a powerful voting bloc in Florida. Asked about his comments in the town hall on Monday, Mr. Sanders repeated the example of Castro’s literacy program and said he had been “extremely consistent and critical of all authoritarian regimes all over the world, including Cuba, including Nicaragua, including Saudi Arabia, including China, including Russia.”

“I happen to believe in democracy, not authoritarianism,” he said. But, he added: “China is an authoritarian country, becoming more and more authoritarian. But can anyone deny — I mean, the facts are clear — that they have taken more people out of extreme poverty than any country in history? Do I get criticized because I say that? That’s the truth.”

The moderator, Chris Cuomo, separately pushed Mr. Sanders on his recent argument that Russians might be behind at least some of the online harassment associated with his campaign. It emerged last week that Mr. Sanders had been briefed on Russian efforts to interfere on his behalf, and Mr. Cuomo asked whether evidence of Russians masquerading as Sanders supporters had been part of that briefing.

It was not, Mr. Sanders said, declining to elaborate on the contents of the briefing because it was classified. But, he continued, he thought it stood to reason that Russians might have been behind, for example, harassment of the Culinary Workers Union in Nevada after it criticized Medicare for all.

“I have perhaps the strongest lifetime pro-union voting record of any member of the Congress,” Mr. Sanders said. “Does anybody really think anyone who’s a supporter of mine, that they would make ugly attacks against really excellent trade union leaders? It just seemed to me kind of fishy.”

He also reiterated what he has said in the past: that he did not want the support of online harassers.

“We do not want your support if you think that what our campaign is about is making ugly attacks on other candidates,” he said. “We don’t want you. You’re not part of us.”

But, he acknowledged, his campaign has millions of followers, “and I’m not going to tell you that we don’t have some jerks out there.”

One of the largest newspapers in South Carolina, The State, endorsed Pete Buttigieg on Monday night in the upcoming primary. The newspaper, which is based in Columbia, S.C., the state capital, said “Democrats need a nominee who seeks to bring Americans together based on common ground — and not divide them along narrow interests.”

The newspaper’s editorial board said that Democrats have won the presidency only during the past half century when they have eschewed the status quo in favor of centrist outsiders with fresh and hopeful messages. The endorsement said that Mr. Buttigieg brings a real world perspective as the former mayor of the Rust Belt city of South Bend, Ind., and said that Mr. Buttigieg’s “Medicare for all who want it” plan was a key selling point that would allow people to keep their private health insurance if they still wanted it.