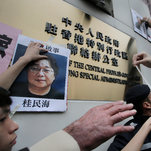 HONG KONG — A court in China has sentenced to 10 years in prison a Hong Kong-based book publisher with Swedish citizenship whose secretive detention in China ignited international controversy. The sentence was quickly denounced by his supporters as the latest example of the Chinese government’s resolve to smother criticism from abroad.

The bookseller, Gui Minhai, disappeared under mysterious circumstances from his home in Thailand in 2015 only to emerge as a target in a campaign by China’s Communist Party to silence dissent even beyond the mainland.

His case angered residents in Hong Kong who saw his detention by the Chinese authorities as a stark sign of the erosion of civil liberties under Beijing’s growing influence. Public anger about the encroachment of the Chinese government into the territory helped drive months of street protests last year that were the largest public expression of opposition to party rule in decades.

The outcry over China’s reach took on international dimensions because Mr. Gui was secretly spirited to China from Thailand and held in custody for two years. Then, in 2018, he disappeared again in dramatic fashion when he was snatched from a train bound for Beijing while accompanied by two Swedish diplomats.

Mr. Gui, 55, was put on trial in January on charges of providing intelligence overseas, the Ningbo Intermediate People’s Court said in a brief notice announcing the verdict. It said he had applied to restore his Chinese citizenship in 2018, implying that he would give up his Swedish citizenship, and that he did not wish to appeal the verdict. The details could not be independently verified.

“We have consistently made it clear that we demand that Gui Minhai be released so that he can be reunited with his daughter and family,” the ministry said in a statement. “This demand still stands. We also demand access to our citizen so that we can provide the consular support he is entitled to.”

Mr. Gui’s sentence was the latest turn in a murky and long-running effort to clamp down on a market for sometimes salacious books on the Chinese leadership that are published in Hong Kong. Such works could not be published in mainland China, but found a booming market among mainland visitors to Hong Kong, a semiautonomous part of China with strong press freedoms.

Mr. Gui was the co-owner of Mighty Current Media, a Hong Kong imprint that had five employees who were held in the mainland, including one, Lee Bo, who was apparently taken off the streets of Hong Kong. All except Mr. Gui were eventually released after giving confessions that were broadcast by Chinese state media.

Most kept silent, but one, Lam Wing-kee, went public after returning to Hong Kong in 2016. He described lengthy isolation and intimidation in an effort to get him to reveal names of writers and customers. He said his confession was written by the authorities, and he had no choice but to deliver it. He later moved to Taiwan, citing fears of growing Chinese influence and control over Hong Kong.

“How could it be possible to kidnap and sentence people just because they produced a few books?” he said in an interview.

Mr. Lam said the sentence was a warning that the Chinese government would strictly punish acts of resistance.

“A few of my colleagues didn’t get sentenced,” he said. “This is probably about them, execute one to warn a hundred.”

The bookseller “appears to have been tried and convicted in secret, denying him any chance of a fair trial,” Mr. Poon said in a written statement.

Mr. Gui gave a tearful confession in 2016 saying that he violated probation for a fatal-drunk driving crash and had voluntarily returned to China to face justice. A year later Chinese authorities said he had been released from custody, but he was not allowed to leave China and was forced to regularly report to the police.

What freedom he enjoyed was short-lived. While taking a train to Beijing with two Swedish diplomats in early 2018, he was grabbed by plainclothes police officers. Mr. Gui had been traveling to the Swedish Embassy in Beijing for a medical examination when about 10 men grabbed him off the train.

The Swedish foreign minister called it a “brutal intervention” into support efforts by the embassy that were undertaken after “repeated assurances from the Chinese authorities that Mr. Gui was free at that time.”

Mr. Gui later spoke at a government-arranged news conference and said he had been manipulated by Swedish diplomats who wanted to get him out of China. Human rights and press freedom groups said Mr. Gui’s comments were likely coerced to distract from his arbitrary detention by the Chinese authorities.

Sweden’s former ambassador to China, Anna Lindstedt, was charged last year with acting outside diplomatic controls after she arranged talks between Mr. Gui’s daughter, Angela Gui, and two Chinese men who said they could help free her father. Ms. Gui said that the men used the meeting to pressure her to not talk about her father’s case.