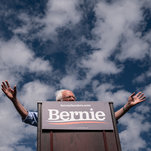 But first, my big question: If things continue the way they’re going now, would you vote for Bernie Sanders or Donald Trump? I know we’ve sort of played around with the question before, but now it’s serious.

Bret Stephens: Hi Gail. You keep pressing me on this point and I keep saying the answer is neither. It’s like asking me to choose between a slow-growing malignant cancer (Trump) and a sudden brain hemorrhage (Sanders). I know you think it’s an epic dodge, as do many of our readers. But when a democratic system offers you awful choices you have a right, like Herman Melville’s Bartleby the Scrivener, to say: “I would prefer not to” — and go vote libertarian.

Gail: There have been times when we’ve found it hard to have a disagreement, given our mutual Trump-loathing. But we could be looking forward to months and months of real battles on this issue. For now, I will just note that many of us believe that the people who voted for the Green Party in 2016 elected Donald Trump.

Bret: Fair point. Let me be more forthright by putting your question another way: Would I feel comparatively somewhat worse the day after the election if Sanders won? Yeah, maybe I would. By now, Trump is a known quantity: disgusting, corrosive, vile, lawless — but so far containable. I fear a Sanders presidency would infect the Democratic Party with its own form of ideological extremism, from which it would take many years to recover and would mean an American system with two political parties that have gone bonkers, rather than merely one.

Gail: You’d feel better if the American people re-elected a man who believes he has the rights of a dictator, who lies to the people and his party all the time, who tosses out public servants who have the effrontery to tell him the truth? Who sets the worst possible image of our country before the world?

Bret: Agree on all of that. I’m like a guy who is being offered two poisoned vials, and you are telling me about all of the poisons contained in Vial No. 1.

Gail: I’m not a big fan of Bernie Sanders, but he’s a veteran elected official who believes in democracy and has worked within the system all his life. If he’s president he’ll propose some dramatic changes in tax and health care policy that you’ll hate. If he’s very, very lucky, Congress will pass reforms way more modest than what he envisioned. And he’ll complain endlessly. Which will be exhausting but hardly a national crisis.

Bret: It would be nice if that were true — and by the way, it would be amusing to watch Republicans rediscover their fiscal hawkishness during a Sanders administration.

But I don’t think that’s the way it’s likely to play out — unless you’re also willing to encourage readers to vote for Republican congressional candidates in swing districts as a way of containing the potential excesses of the Bernie agenda. I think a Sanders win in the general election would only happen as part of a wave election, like Reagan in 1980 or Obama in 2008, meaning he’d have a mandate and the votes to pass a large part of his agenda.

And that would mean we’d really get to Feel the Bern in ways I think would be economically and socially ruinous. Medicare-for-All alone would entail levels of taxation unheard-of for working-class Americans, never mind the rich and the middle class. Slashing the defense budget at a time when Russia wants to cripple NATO and China wants to run the United States out of the Western Pacific would be another historic and irreversible mistake. He might appoint a Fed chairman who believes in Modern Monetary Theory, which would be a recipe for hyperinflation. I could go on, but you get my drift.

Gail: To win Congress, particularly the Senate, Democrats need victories in a lot of purple and red states. Sanders would lead, but hardly control, that kind of majority. Do you think, say, Senator Doug Jones of Alabama is going to keep his seat by running as a Bernie Bro? At optimum, Sanders would be stuck negotiating with a lot of people who got elected by promising to stand up to him.

Bret: But are we really certain Sanders will be the nominee? Is this nomination contest over and done with after Nevada?

Gail: I am really, really sorry that this is set up so a nominee is likely to be locked in before most of the country gets to vote. It’s only February, for heaven’s sake.

But Bernie seems to be almost there. Unless, say, Joe Biden wins in South Carolina and leads a big moderate surge. Finishing second in Nevada is as good as he’s ever done in his history of three presidential runs.

Let me say once again that my deep concern about Sanders as a candidate is not about his presidency — it’s my fear that he can’t beat Donald Trump.

Bret: As you know, sometimes (in my darker moods) I’m disposed to think he’s the only Democrat who can beat Trump. He inspires the same kind of fervent, true-believing following as Trump. He has a clearly articulated sense of right and wrong that makes it easy for his supporters to feel good about voting for him, without looking closely at the fine print or price tag of his policy proposals. He channels the rage so many Americans feel not only about Trump, but of the entire system he represents. And Sanders can win at least some of the working-class voters who went for Trump last time and who feel the president has done nothing to make their lives better.

Gail: Well that cheers me up.

Bret: On other days, I think he’s the reincarnation of George McGovern and will lose to Trump in one of the biggest landslides in history.

Bret: He also became a hard-working capitalist in his later years, after he tried to run a hotel in Connecticut that went under as a result of overregulation. Sorry, please continue.

Gail: We’re on very different pages here. You think Bernie could win but he’d be terrible as president. I think he’d be fine in office, but I’m worried he won’t win. Think positive. Maybe we’re both right: Bernie can win and if he does, the country will be better off.

Bret: Alternative hypothesis: Maybe he can’t win, and he would be a terrible president. Which is sort of like the joke about the food being terrible and the portions too small.

Gail: In the much shorter run, tonight is debate night. Two things I’m looking for. First, can Bloomberg improve? Not expecting him to win, but just maybe restore his reputation?

And second, will all the Dems who piled on Bloomberg in the last debate turn around and pile on Bernie? If they actually want to have any hope of getting the nomination, it’s time.

Bret: Bloomberg will have to do a few things to improve on the ultralow bar he set for himself last week. Make a self-deprecating joke or two. Ingratiate himself with the audience — and his fellow contenders on the stage — by saying he will spend unlimited amounts of money to defeat Donald Trump by supporting whoever wins the Democratic nomination, including Sanders. Stop apologizing for his record as mayor — a record The New York Times editorial board enthusiastically endorsed in both 2005 and 2009, with only a glancing mention of stop-and-frisk.

Gail: I was disturbed that he hadn’t come up with a quick, clean, you’re-right-and-I-apologize response. It might not have worked, but any presidential contender worth his salt would have been prepared with a good attempt.

Go ahead, what else?

Bret: And make the case, as strongly as possible, that Trump’s fondest wish is to run against “Crazy Bernie” in the general election.

As for the other candidates, I have news for them: None of them is likely to be Sanders’s choice for vice president. If they can’t criticize him forcefully, they should get off the stage in favor of whoever is the consensus standard-bearer for the moderates.

What did I miss?

Gail: Well, if Bloomberg can get in some humor, self-deprecation, smooth apologies for errors past and then take on Bernie, he’ll … do better. Probably still won’t win, but it’ll be a lot easier for him to be a Democratic underwriter and consultant-to-the-nominee if he looks a little lovable.

OK, not lovable. Likable will do.

Bret: Bloomberg will have to summon that part of himself that was the hungry young man from nowhere who nearly lost everything before he gained nearly everything — and is now willing to give nearly all of it away because of his love of country. It’s doable: I’m happy to give him debate tips at a modest rate of $3 million an hour. (Kidding!)

If he can’t do that at tonight’s debate, however, he needs to draw the conclusion, quickly, that he’s not going to win, and shouldn’t wreck the chances of his fellow moderates by staying in the race. I say this as someone who supported him enthusiastically when he jumped in the race last year.

But, as someone once said, when the facts change, so do my views.

The Times is committed to publishing a diversity of letters to the editor. We’d like to hear what you think about this or any of our articles. Here are some tips. And here’s our email: letters@nytimes.com.