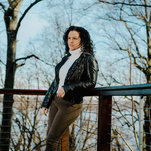 Writing About the Border Crisis, Hoping to Break Down Walls

During one of many harrowing moments in Jeanine Cummins’s new novel, “American Dirt,” the protagonist, a bookstore owner named Lydia, has a jarring realization.

Lydia and her 8-year-old son, Luca, are fleeing from their home in Acapulco, Mexico, after hit men from a drug cartel killed 16 members of their family. Traumatized and desperate, Lydia hatches a risky escape plan: She and Luca will disguise themselves as migrants and attempt to cross the border into Arizona. As she researches what they will need to survive the journey, it dawns on Lydia that she and Luca aren’t pretending. They “are actual migrants.”

“All her life she’s pitied those poor people,” Cummins writes. “She’s wondered with the sort of detached fascination of the comfortable elite, how dire the conditions of their lives must be wherever they come from, that this is the better option.”

The character’s insight is a deliberate provocation by the author, who wants readers to reckon with the humanitarian cost of America’s broken immigration policies.

“It’s a story that I think is at too comfortable a remove from the citizens of this country right now,” Cummins, 45, said in an interview on a frigid, snowy day last month. “This really is a tragedy of our making on our southern border. We are absolutely responsible for all of these deaths. This blood is on our hands.”

Whether or not it succeeds in reshaping readers’ views, “American Dirt” — which chronicles Lydia and Luca’s grueling and treacherous journey of more than 1,000 miles — seems poised to become one of this year’s biggest breakout works of fiction.

The novel, which comes out on Jan. 21 with a hefty first printing of half a million copies, set off a bidding war between nine publishers and sold to Flatiron Books in a seven-figure deal. It received ecstatic advance reviews from Publishers Weekly and Kirkus, which called it “intensely suspenseful and deeply humane.” Blockbuster authors like Stephen King and John Grisham have heaped praise on the book, and Cummins received support from prominent Mexican-American and Latina authors, including Erika Sánchez, Reyna Grande and Julia Alvarez, who predicted the book would “change hearts and transform policies.”

Sandra Cisneros, the author of the best-selling novel “The House on Mango Street,” said she hoped that “American Dirt” could help highlight the obstacles migrants face, particularly for American readers who might otherwise be indifferent to the subject.

“It’s written in a form that will engage people, not just the choir, but people who might think differently,” Cisneros said. “We’re always looking for the great American story, and this is the great story of the Americas, at a time in which borders are blurred.”

“American Dirt” has also generated criticism. Some authors have questioned whether Cummins, who grew up in Maryland in a working-class family and identifies as white and Latina, succeeded in her effort to write from the perspective of Mexican migrants and accurately convey their experiences.

In a withering review on the site Tropics of Meta, the poet and writer Myriam Gurba wrote that “American Dirt” was full of clichés and stereotypes about Mexico, depicting it as a lawless, violent country overrun by drug cartels and corruption.

“This is like a Trumpian fantasy of what Mexico is, and we don’t need any more Trumpian fantasies,” Gurba said in an interview. “It’s even more noxious because it’s masquerading as a piece of progressive literature.”

The Mexican-American writer and translator David Bowles echoed those views and called “American Dirt” “appropriating” and “inaccurate.” “At a time when Mexico and the Mexican-American community are reviled in this country as they haven’t been in decades, to elevate this inauthentic book written by someone outside our community is to slap our collective face,” he said in an email.

Gurba and other writers of Mexican heritage have also criticized Cummins for drawing on works about Mexico and migrants by other authors, including Sonia Nazario and Luis Alberto Urrea. In a note at the end of “American Dirt,” Cummins acknowledges her debt to those writers and others whose work shaped her understanding of Mexico and the issues that migrants face.

Cummins researched the novel during trips to Mexico and by conducting interviews on both sides of the border. She spoke with people whose families had been torn apart by deportations, lawyers who work with unaccompanied minors, migrants in shelters in Tijuana and human-rights activists documenting abuses.

Still, she concedes that she is an imperfect messenger for a story about migrants. As a nonimmigrant, she was reluctant at first to write an entire novel from the perspective of Mexican migrants, for fear of getting it wrong, or appearing to be opportunistically seizing on a humanitarian crisis. It still nags at her, even as the publication day approaches.

“I don’t know if I’m the right person to tell this story,” Cummins said during an interview at her home overlooking the Hudson River in Rockland County, N.Y., where she lives with her husband, a flooring contractor, and their two daughters. In her author’s note, Cummins, whose paternal grandmother came from Puerto Rico, describes her fear that her “privilege would make me blind to certain truths” and says she wished that someone “slightly browner than me would write it.” But she insists that writers from all backgrounds should not shy away from a subject that has become so central, and polarizing, in American politics and culture.

“I do think that the conversation about cultural appropriation is incredibly important, but I also think that there is a danger sometimes of going too far toward silencing people,” she said. “Everyone should be engaged in telling these stories, with tremendous care and sensitivity.”

Fiction in particular, Cummins said, has the potential to broaden and deepen readers’ understanding of an issue that many Americans are only peripherally engaged with, if at all.

“We are telling these stories in our culture very superficially,” she said. “There’s the narrative from the right, which is that these people are like an invading mob of criminals, and then from the left, the narrative is, ‘Oh, these poor people, these impoverished people, they need our help, we must save them.’ And there’s this huge gap in the middle where their humanity should be.”

Cummins was born in Rota, Spain, where her father was stationed in the Navy, and grew up in Gaithersburg, Md. She studied English and communications at Towson University, then spent two years in Belfast, Ireland, where she worked as a bartender and wrote “terrible poetry.” After moving back to the United States, she found work in the paperback sales department at Penguin.

While she was working there, she published her first book, “A Rip in Heaven,” about a tragedy that struck her family in 1991, when her brother and two female cousins were attacked on a bridge in St. Louis by a group of men. The men raped her cousins and forced them off the bridge, killing them. Her brother, Tom, was also forced to jump off but survived. Years later, he asked Cummins to write a book with him. He backed out of the project, leaving Cummins, who was 16 when her cousins were killed, as the sole author.

Researching and writing about the crimes was daunting, Cummins said — “There were a lot of details I didn’t want to know” — but it brought some relief and helped her learn how to write about trauma in a way that didn’t feel gratuitous or sensational. Those themes, and a desire to “take stories away from the perpetrators and give them to the survivors,” shaped her next two books, the novels “The Outside Boy” and “The Crooked Branch.”

She began researching a novel about immigration seven years ago, envisioning it with a diverse cast of characters: border patrol agents, American citizens living near the southern border, families that had been separated by deportation and undocumented migrants. But the narrative never cohered, and Cummins couldn’t escape the feeling that she was avoiding the crux of the story.

Then, shortly before the 2016 presidential election, she experienced another family tragedy when her father died suddenly from a heart attack. She spent months in mourning, unable to write. One day, she pulled out her laptop and wrote the opening of “American Dirt,” a scene where Luca and Lydia narrowly survive the gunfire that kills Luca’s father, a journalist who wrote about drug cartels, and 15 other relatives. She finished a draft in less than a year, and sold the novel in the spring of 2018.

In the time Cummins spent researching and writing, the humanitarian crisis on the southern border only grew more dire, and the political debate became even more charged. As she prepares to promote “American Dirt” on a cross-country book tour, with appearances in 40 cities in 26 states, Cummins is trying to avoid talking about the story in ways that might seem partisan, and to steer clear of terms like “illegal” and “undocumented.”

“All fiction, all good fiction, can potentially dismantle some of the problematic language that serves often as barriers to meaningful conversation,” she said. “We don’t have to choose a label for Lydia and Luca. They’re people.”