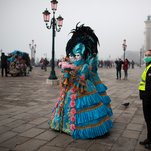 We’re covering the global spread of the coronavirus, the aftermath of the Nevada caucuses, and President Trump’s trip to India.

In the first major outbreak of the virus outside Asia, Italy reported more than 150 confirmed cases on Sunday, a sharp increase from fewer than five last week. Officials locked down at least 10 towns in the northern region of Lombardy, affecting at least 50,000 people.

A wider outbreak could test the principle of open borders that is fundamental to the European Union. Here are the latest updates and maps of where the virus has spread.

Spreading ‘much faster than I expected’

With all of the coronavirus news, it seemed like a good time for a little perspective. We posed some questions to Donald McNeil, a Times reporter who has covered epidemics and pandemics for nearly two decades.

What worries you about this virus?

It’s more deadly than flu, and it’s spreading like flu. Maybe not quite as fast, but these cases where hundreds of people were infected in one church or aboard one cruise ship — that was scary. That was much faster than I expected.

Why are conspiracy theories gaining traction? We’ve reported on the belief in unfounded claims about the origins of the virus: Some say it came from a lab in Wuhan, while Russian actors have spread a theory alleging the U.S. is behind the outbreak.

Conspiracies are the first thing some people go to when they face something new and scary. This happened with Zika; people rejected the truth that the virus caused microcephaly and blamed pesticides or genetically modified mosquitoes. But in medical school they teach you: If you hear footsteps, assume it’s horses, not zebras. That is, try the obvious diagnosis first.

The obvious origin is the same as we saw in SARS and MERS: that it’s a bat virus that passed through other animals into people.

Coming off a landslide victory in the Nevada caucuses over the weekend, the Vermont senator turned his focus to South Carolina, where he hopes to overtake the front-runner in the polls there, Joe Biden.

The Democratic race is entering a nine-day stretch that could determine the nomination, with a debate on Tuesday, South Carolina’s primary on Saturday and Super Tuesday on March 3.

Catch up: Mr. Sanders has won the most votes in the first three states. Here are five takeaways from the Nevada caucuses and highlights from Sunday’s campaigning.

News analysis: Every leading Democratic candidate has proposed trillions of dollars in taxes on businesses and wealthy Americans. “People believe the taxes are too low on the very wealthy,” said Neera Tanden, the president of the liberal Center for American Progress. “That’s become a cornerstone belief.”

If you have 6 minutes, this is worth it

Learning how to reverse an overdose

Carter County, Tenn., is one of many American communities hit hard by the opioid crisis. In an effort to save lives, county health officials have embraced a practical — if radical — strategy: teaching children as young as 6 how to reverse an overdose, using a nasal spray called Narcan. Above, after a training session at a library, each child received a blue bag containing two doses of Narcan to take home.

But in a socially conservative region, where addiction is often seen as a sin, health workers have encountered strong opposition to the training.

Here’s what else is happening

President Trump in India: Mr. Trump began a two-day visit today, attending a rally of more than 100,000 people at a cricket stadium in the western city of Ahmedabad.

Venezuela’s economic truce: Decades of socialist-style control devastated the country’s economy. Now, capitalism is helping to keep Venezuela afloat and President Nicolás Maduro in power. Our correspondent explains the business deal that was the cornerstone of that transformation.

Snapshot: Above, a forest this month in New South Wales, Australia, that was damaged by fire late last year. Devastating floods followed the country’s fire season, a cycle that scientists call “compound extremes”: one climate disaster intensifying the next.

In memoriam: B. Smith, famous for her Manhattan restaurant, also wrote books, hosted a TV show and created a furniture line. She died on Saturday at 70.

Metropolitan Diary: In this week’s column, a stack of letters to send, another round at McSorley’s and more reader tales of New York City.

What we’re reading: This essay on Medium. Our Interpreter columnist Amanda Taub says, “This beautifully written piece uses the idea of ‘the sentences that stick with you’ to frame six autobiographical vignettes.”

Now, a break from the news

Cook: Winter vegetable soup comes together in about an hour.

Listen: “No Time to Die” makes Billie Eilish, 18, the youngest artist ever to record a James Bond theme song, and sees her slipping into a boomer-approved role.

Read: With a clear voice and a bit of suspense, Karen Blumenthal’s “Jane Against the World” charts the rocky road that led to legal abortion in the U.S.

Smarter Living: Plenty of devices claim to stop snoring. Wirecutter, a product review site owned by The Times, found a few that work.

And now for the Back Story on …

The memorial for the former N.B.A. star and Gianna, his 13-year-old daughter, takes place at 1 p.m. Eastern today in Los Angeles, and will be streamed live by the Lakers. Bryant and his daughter were killed, along with seven others, in a helicopter crash last month.

Bryant was 17 when he joined the Lakers in July 1996. I was the 27-year-old Lakers beat writer for The Los Angeles Daily News. I had been on the N.B.A. beat for only two and a half years. You can safely conclude that the supremely confident, deeply ambitious, me-against-the-world Bryant was the first player I ever covered who was 10 years younger than me.

I wound up moving away before Bryant’s first N.B.A. playoff game when a job offer from The Dallas Morning News proved too good to pass up. But shadowing Bryant almost every day for his first nine months in Los Angeles managed to keep me on his radar for the next two decades.

He never told me so, but I was convinced it was because I had been there from the rocky start, when Shaquille O’Neal could be regularly heard singing “I believe that Showboat is our future,” changing the words to the first line of Whitney Houston’s “Greatest Love of All.”

“Showboat” was Shaq’s snarky nickname for Bryant, who initially struggled to fit in on a team full of veterans.

We developed a ritual on Bryant’s visits to play in Dallas. I would hover near the loading dock at American Airlines Center to intercept him as soon as he got off the team bus. It gave me the chance to walk with him to the visitors’ locker room before the usual pack of reporters swarmed.

But it’s Bryant’s youth when we met that I’ve kept coming back to since Jan. 26, when his helicopter crashed into a hillside near Calabasas, Calif.

I can’t shake how Bryant’s beloved “Gigi,” just like her father when he became a Laker, was a mere teenager.

That’s it for this briefing. See you next time.

Thank you
Mark Josephson and Eleanor Stanford provided the break from the news. You can reach the team at briefing@nytimes.com.

P.S.
• We’re listening to “The Daily.” Today’s episode is about the corporate push to fight climate change.
• Here’s today’s Mini Crossword, and a clue: Fireplace fuel (four letters). You can find all our puzzles here.
• Do you subscribe to one of the technology-focused newsletters from The Times? We’d like to hear from you.