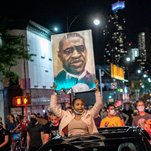 Your Weekend Briefing: Halfway Through 2020

(Want to get this briefing by email? Here’s the sign-up.)

We tend to pause at the end of December to recognize and reflect on the year’s most memorable moments. But six months into 2020, it feels as if we’ve already lived decades. And we still have a presidential election to get through.

The first three months of the year seem a distant memory, or as your Weekend Briefing writer likes to refer to it, “a time ago.” Here’s a recap of 2020 so far with some help from Times reporters and editors.

1. We started 2020 nearly going to war with Iran. Perhaps we should have taken that as a hint of the tumultuous year ahead.

2. Less than a week into the new year, John Bolton announced that he would be willing to testify in the Senate impeachment trial of President Trump.

It was a tantalizing prospect. Mr. Bolton, the former national security adviser, above in 2019, was privy to the inner workings of the White House. He was said to be deeply troubled by Mr. Trump’s efforts to pressure Ukraine, and had even written a memoir that, when it was finally released months later, divulged, as promised, much of the inside story.

The possibility of his testimony — and of an outcome that wasn’t a party-line acquittal — hung over the trial for weeks. But Republicans, who had endured countless hours of damaging testimony during the House investigation, had no interest in changing the rules of the trial to allow new witnesses.

3. From the beginning, it was always Joe Biden.

Sure, his chances of winning the Democratic presidential nomination looked shaky after devastating early defeats in Iowa, New Hampshire and Nevada. But his staunch support among Black voters powered a comeback in South Carolina. The one-two-three punch of support from Pete Buttigieg, Amy Klobuchar and Beto O’Rourke led to blowout victories on Super Tuesday, effectively spelling the beginning of the end of the competition.

Still, a primary field more than two dozen strong was nothing if not historic. The most women ever to run for president. The biggest age gap. The most racially diverse field. The first openly gay major presidential candidate.

But after three years of President Trump, Democratic voters proved themselves to be tired of the unprecedented. In 2020, the pragmatic outweighed the possible. — Lisa Lerer, political reporter

4. It was the breakup heard around the world.

Prince Harry and Meghan delivered a jarring blow to Britain’s royal family when they announced on Jan. 8 that they would “step back” from their official duties. It was an extraordinary retreat by the couple, who had grown increasingly isolated within the House of Windsor since their wedding in 2018.

The couple did not originally have the queen’s approval for their plan to become part-time royals, and went rogue to get ahead of a leak. A deal with Buckingham Palace, which included giving up their royal titles, became official on March 31. Above, their last royal appearance.

They now live in Los Angeles with their son, Archie. — Remy

On March 11, Harvey Weinstein, the glorified producer who for years dominated Hollywood, was sentenced to 23 years in prison for sex crimes, effectively putting the 67-year-old behind bars for the rest of his life.

His sentencing capped a sharp downfall for the once-powerful media mogul that started in October 2017 when several women openly accused him of sexual assault and harassment, and fundamentally altered the perception of sex crimes and power dynamics. — Alisha Haridasani Gupta, gender reporter

7. It first appeared in The Times on Jan. 6 as a “mysterious, pneumonialike illness” that had sickened a few dozen people in Wuhan, China.

Days later, Chinese researchers identified the source as a coronavirus. Two weeks later, the virus was on the front page of The Times as China scrambled to contain the contagion.

Then, time seemed to accelerate. Once-in-a-generation events began erupting one after the next.

And that was just March 11.

More than 10.9 million people have been sickened worldwide and more than half a million have died. Above, gravediggers in São Paulo, Brazil. In the U.S., the country hit hardest by the virus, a surge in new cases shows that the outbreak is spiraling out of control. And from what we can tell, the virus will most likely be with us for some time. — Jonathan Wolfe, Briefings writer

8. A pandemic does strange things to the economy.

The sharp, sudden drop in activity has produced one of the deepest recessions in history, and also perhaps the shortest. Indeed, it may already be over: The upswing in May and June, measured against the depths of March and April, make a range of economic indicators look as if they are soaring.

But compared with a year earlier, those same numbers reveal an economy that remains deep in a hole, with millions of jobs destroyed and billions in sales lost. The damage done will take a long time to repair, and reopenings that have been paused or rolled back may make things worse. — Jason Karaian, DealBook editor

9. Everything from work to theater moved online.

Sex work and sex content make an intriguing leading indicator about where both work and entertainment consumption are going.

This year we saw that our unhappy surprise always-at-home culture made opportunities of all kinds, for the kind of professional streaming sex performers pictured above, amateur dancers and entrepreneurs alike.

That will trickle down! Contributing strongly to that? More and more time spent online, the vast majority of that in apps. If you’re not watching TikTok and Instagram and listening to podcasts in the ways that we used to watch CBS and read Condé Nast magazines, the world is leaving you behind, sir or madam! (Fair, that may be a good choice.) — Choire Sicha, Styles editor